Bath travelled to Cotswold league favourites Cheltenham,  with the full allowed squad of 13 players allowed in this Pandemic affected season.

Bath have only managed to get one pre-season friendly into the bank, so it was no surprise the visitors started slowly and took the first quarter to settle into the game; conceding from clears when midfield players failed to track back into defence. Cheltenham were well drilled and worked a very good plays to create chances and pressure Bath. scoring three goals with only a solo effort from Gareth Davies to put Bath on the score sheet.

Bath controlled the second quarter scoring five unanswered goals. Bath’s defence worked much better on sliding and covering. Ramzi Rasr and Laurence Dawson-Smith played excellent body defence and made it hard for Cheltenham to create the chances they had before. If Cheltenham did get through the defence they met a rejuvenated Mark Lane in goal who pulled off save after save. Josh Yeoman led the defence expertly ensuring correct sliding and cover and worked very well with the mid in transitioning the ball into attack. Bath’s attack worked well with their movement and control frustrating Cheltenham and getting numerous man up advantages which saw Henry Phillips opening his account for Bath and was unlucky to not have more this game.

After the half Bath continued to control the game but Cheltenham’s defence tightened up considerably, learning from the first half. Bath’s midfield ran hard all day losing Chris Brown unfortunately due to injury, Alex George, Sam Kettle, Henry Phillips, James Runge and Ben Lawson worked well in Bath’s new systems and created lots of chances all game. Alex George provided three assists on the day. A good solo goal from Oliver Viant and outside shot from Luke Wilmot were Bath’s kept Bath in control and stemmed the early comeback from the home team 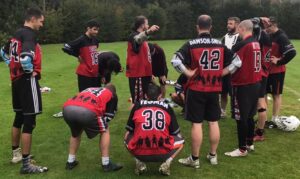 In the fourth quarter the game fell away from Bath. Passes in attack missed their mark and Cheltenham’s defence capitalised putting Bath under pressure to win the ball back at crucial moments then taking the lead and the win near the end of the quarter.

Bath players were rightly frustrated to have lost like this to their close rivals but there were much more positives than negatives from the game. Bath’s movement and control during periods of the game were incredible for a team who only started training again properly in September. The feeling around the team and the club is at a high point and they are looking to keep pushing and improving this season.

A highlight of the game was an Oliver Viant goal, dodging off of a Luke Wilmot pick and ending with a flying crease dive finish. 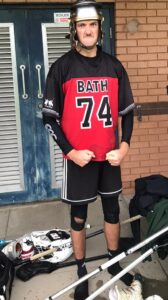