An opening home game of the season for Bath at the familiar location of the Odd Down 3G. Bath had narrowly beaten Bristol in one and drawn the other in local league fixtures last season, but this was always likely to be a more competitive test in SEMLA Division 2. Bristol fielded two former Bath players in Owen Edwards and Matt King as well as a new American ‘keeper. 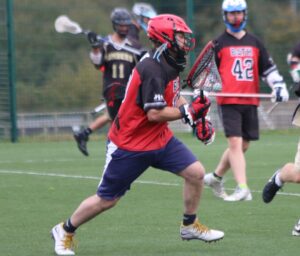 Bath, starting with the ball instead of face-off, started well, moving the ball around in attack, but finding no way past the Bristol ‘keeper. It was an even, cagy opening with both teams finding their rhythm in the game. It was Bath who opened the scoring, debutant Jamie Powell breaking inside the Bristol defence to fire into the bottom corner. Bristol hit back before the break, to leave both teams matched 1:1 at the end of the quarter. 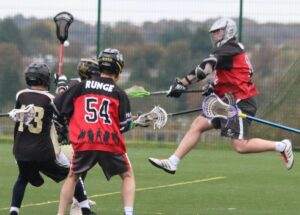 The second quarter brought more of the same tight contest. Too much eagerness in defence and a lack of cover allowed Bristol to score two quick goals and move into the lead. In response, some reckless challenges forced Bath to defend for a period with a 5-man then 4-man defence. However, led by Man of the Match Laurence Dawson-Smith, the defensive unit held firm to leave Bristol disappointed in not taking their chance. And after a time-out to regroup, Bath responded well. When Mike Carey fed a ball into crease, Luke Wilmot “tactically left it and decided the screen was the best option”. This fooled the Bristol defence and ‘keeper and the ball whistled through everyone and into the net. There was just enough time (depending on how much time CBO Sam Kettle was counting) for Bath to almost grab an equaliser. A fast break led to a good 1-on-1 save by the Bristol ‘keeper from Carey, before Powell picked up the pieces and was denied by the post. 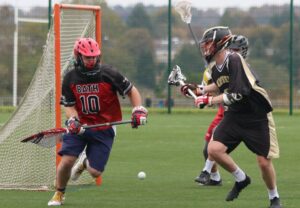 Both sides tightened up after the break and there was very little in the third quarter. It took a good combination play between the two ex-Bath players, King and Edwards, for Bristol to score the only goal of the quarter and extend their narrow lead. 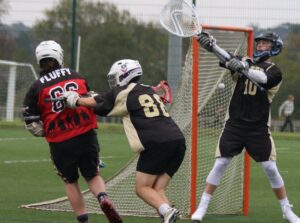 With a two-goal deficit in the final quarter, it was Bath who had to push the tempo of the game. This renewed urgency from Bath forced Bristol into some mistakes. After Gareth Davies knocked the ball out of a Bristol player trying to clear, Alex George scooped up the ground ball and fed Wilmot who finished from a tight angle. Bath were buoyant but took their eye off the ball and allowed Edwards to run around from X and restore Bristol’s two-goal advantage. Bath hit back again though as Carey worked some space away from his defenders to slot home. With no face-off, Bristol were more able to try and run the clock out on the large Odd Down pitch. This left Bath to over-commit and were punished as Bristol’s number 5 found the space to score. Bath’s frustration was visible and led to ‘keeper Mark Lane throwing the ball away and receiving a decision of ‘delaying the game’ by the umpires. This gave Bristol possession back from the restart and they repeated the punishment to take an unsurmountable 7-4 lead to the final whistle.

Though a disappointing result, the performance was encouraging, and Bath will aim to learn lessons in discipline from this match. They will also get the chance to settle the score with Bristol in three more fixtures this season. 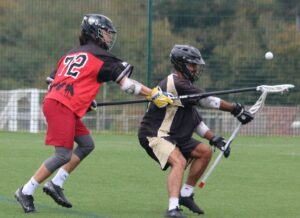