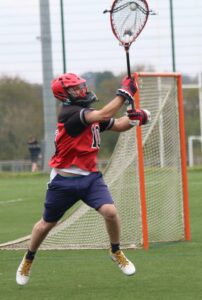 Bath travelled to Oxford for a second local league fixture of the season against Oxford City.

Starting with possession in lieu of face-off, it didn’t take Bath long to get into their stride. Oxford had hardly laid stick on glove, let alone ball, when Josh Yeoman squeezed through a gap in their defence to open the scoring. Then a mistimed and lax substitution by Oxford left Alex George completely unmarked on crease to receive a pass from Yeoman to put Bath 2-0 up early on. It looked like being a rout, but Oxford fought back into the game well even with the added disadvantage of attacking up the slope. Always busy, their movement caused some problems for Bath’s defence and they added goals through no. 95 and 97 (former Bath player Andy White twisting away from his near namesake Sam White). Bath kept their lead intact throughout the quarter thanks to a hat-trick of goals from Ollie Viant. Assists came from George, White and Yeoman for these goals, but in truth all three goals were the product of Viant’s running and movement. Bath finished the quarter 5-2 in front. 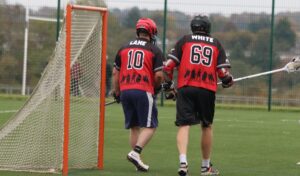 The second quarter saw Bath having to tackle the slope of the pitch as well as Oxford. This required Bath to play a more settled game, in order to conserve energy on attacks. Bath created numerous chances, with Simon Griffiths the main beneficiary as three quick finishes gave him an in-quarter hat-trick (although there were some who claimed that the last of these goals was courtesy of a deflection off an Oxford defender’s leg). Yeoman and Viant also added goals in this quarter in which Bath arguably could have score more given their dominance, with just a single goal for Oxford in consolation.

The third quarter was a more cagy affair. George added a second in almost identical fashion to his first. Bath were then on the wrong end of some refereeing decisions and played a significant part of the quarter a man down (including Laurence Dawson-Smith taking two minutes as a result of a vicious body check by ‘keeper Mark Lane). Bath stayed tight though thanks to this season’s new five-man defensive drill that is becoming increasingly effective by the game. Bath even managed to score while man down. With Oxford middies pressing on the halfway line, Viant used the space behind to run amongst the defence to score his fourth. Bath edged the quarter 2:1.

Despite claims from Oxford that Bath were tiring, the fourth quarter proved the opposite. Bath used the full space of the large pitch, with Ramzi Nasr in particular, running Oxford down. Gareth Davies scored two goals in attacks after twisting and turning on crease. Wilmot sold his defender with a fake before rifling the net and Yeoman circled crease to complete the scoring for Bath, although it could have been more if not for the increasingly good saves of the Oxford ‘keeper. 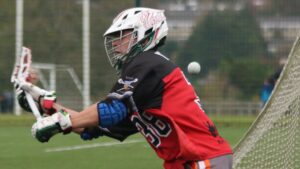 Overall, it was a good win for Bath, as even though Oxford City are on paper the weaker opposition in the division, the game was a tough workout. The benefits of having good attendance at training and a regular and settled team for matches is showing, as the movement in attack is more fluent and coordinated. Similarly, the defensive unit is looking strong and showing good understanding together, particularly on man down defence.