A small but enthusiastic Bath Women’s lacrosse squad travelled to Westonbirt School to take on the Tribe second team in the South West Women’s Autumn Fixtures Schedule and looking for a first win of the season. Each game has seen huge improvement in the team play.

Bath played with real purpose, competing in all departments, with both teams jostling for the lead throughout the game. Tribe opened the scoring and moved into a 2 goal lead,  but Bath showed their character and quickly fought back, moving the ball well in transition through the midfield and converting the break with a well worked goal to keep in touch. A goal each before the whistle saw the home side take a narrow 3:2 lead into the first break. 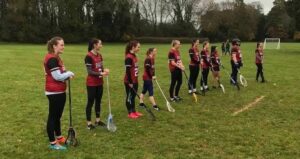 After re-grouping and catching their breath Bath went all in during the second quarter, working hard and converting strong possession into goals, winning the quarter 4:3 to end the half all tied at 6:6.

Throughout the third quarter, the ball was going end-to-end with lots of good defending from the Bath midfield players, tracking back well and keeping the Tribe attack under pressure. More strong transition with the ball in midfield gave Bath increased opportunities to score. At the back, the defence unit kept the Tribe attack at bay gaining several turnovers. But the high tempo was beginning to have an effect and Tribe edged the quarter 3:2 to move into the final period with a one goal lead 9:8.

With no subs, Bath’s team began to look a little tired during the final quarter and Tribe began to pull away. Even with tired legs, Bath continued to stay strong in defence and convert several opportunities into two goals. Despite best efforts, the Tribe ran out 5:3 winners of the 4th quarter making the final score was 14:11 to the home side.

A fantastic team effort from the ladies and a well-deserved MVP goes to Stephanie Macpherson, working tirelessly throughout the game.