Bath hosted a friendly match against Rendcomb College from Cirencester on a windy and rainy Odd Down day. Rencomb, although a comparatively small school have a long tradition of Lacrosse and fielded several County U19 players. 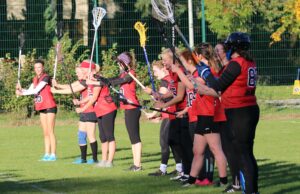 By half time it was 5-1 to the Rendcomb with Bath’s only goal coming from Jocelyn Cotterill. Despite the score difference on paper the play on the field was very even, with the ball going end-to-end and both keepers being kept busy.

In attack, there was some excellent play and movement from the Bath line up, Beth Carey, Sarah Stokes, Sophie Griffiths and Victoria Westwood but unfortunately the home team were unable to convert the many chances created. Two of the line up have lacrosse playing fathers from the club (Carey and Griffiths), no pressure to make dads proud at all.

In the second half the midfield players worked incredibly hard to keep the ball safe during transitions up the pitch. Jocelyn Cotterill, Zoe Broad, Ellie O’Connor, Stephanie Macpherson and Olivia Collett battled against Cirencester’s strong defending to get the ball into attack.

The attack continued to move the ball between them around the goal, with Beth Carey scoring the only Bath goal of the second half.

The defensive players (Carmen Larrea, Jen Jeffcoat-Marsh and Beth Storey) continued to keep the Cirencester outfit back for long periods of time, creating a lot of knock downs; but were unable to convert their hard work into possession of the ball. 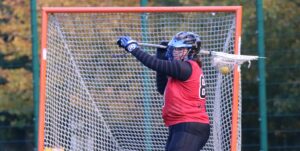 In goal MVP, Katie Little pulled off a lot of fine saves from an increasingly confident and potent Rencomb offence, keeping the score line respectable.

Despite great team spirit and good effort from all individuals, the final score was 18-2 to Rendcomb.

Rencomb head coach Karen Coups is keen to get some quality game time for her first team, COVID has limited the college’s traditional fixture list, with a lack of tournaments and local U19 opposition.  The clubs are the obvious local (non-traditional) competition but getting the balance of the right quality of opposition is proving problematic; this game comes only a couple of weeks after the college put Reading LC Women 3rd  team to the sword by over 30 goals, putting the Bath score into perspective.

The good news is that the college want a rematch as the game quality was “about right “ and Bath are good hosts.