Bath travelled to Purley for the furthest away game yet this season. Despite the distance, Bath managed to name a strong team, with a bench of 6. Brian Ivory returned in defence for the first time this season

Due to lack of numbers from Purley, the game started with 8-a-side. This led to some confusion from Bath and Purley took the lead. After more confusion with a switch to a 9v10 game, Bath took a time-out and resettled the play. Mark Lane scored two good goals with runs from up top, both assisted by Alex George. 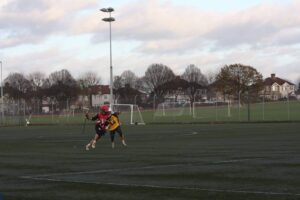 In the second quarter Bath struggled to get the ball moving around in possession, hampered somewhat by the low winter sun. Wilmot scored (assisted by Lane) to move Bath ahead, but Purley kept in touch with a goal of their own.

From the start of the second half, Purley hit back straight away. Despite a man disadvantage they scored almost straight from face-off and added another in the next play to turn a one-goal deficit into a one goal lead. Purley didn’t sit back though and they kept up the pressure on Bath’s goal which goal did collapse at one point this quarter, (due to extreme wind rather than Purley though).

Bath fought back into the game and their movement and cuts from the attack moved the Purley defence. Lane assisted Butler before James Runge assisted Wilmot for his second. After another Purley goal, Lane then again assisted Butler to return Bath to a one-goal lead. 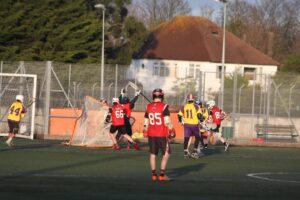 The final quarter fitted much the same pattern as the rest of the game, with Bath on top but Purley battling hard. Despite his teammates urges to keep possession, Hayden Grey fired in a fierce leftie shot to keep Bath in front. A shot from Runge was saved by the Purley ‘keeper and after Si Griffiths was quickest and closest to react to turn the ball home. Bath seemed to be heading for victory, but a Purley goal made for a tight closing couple of minutes. Despite a last minute send-off, Bath managed to throw enough bodies in the way of Purley and close out the game to win 8:7. 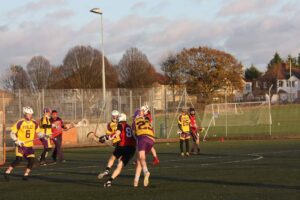 Overall, the result was a win for Bath, but by a margin that was too close for comfort. Purley battled exceptionally well with just 9 men and made a real game of it. A first victory on the road for Bath this season was well enjoyed though.